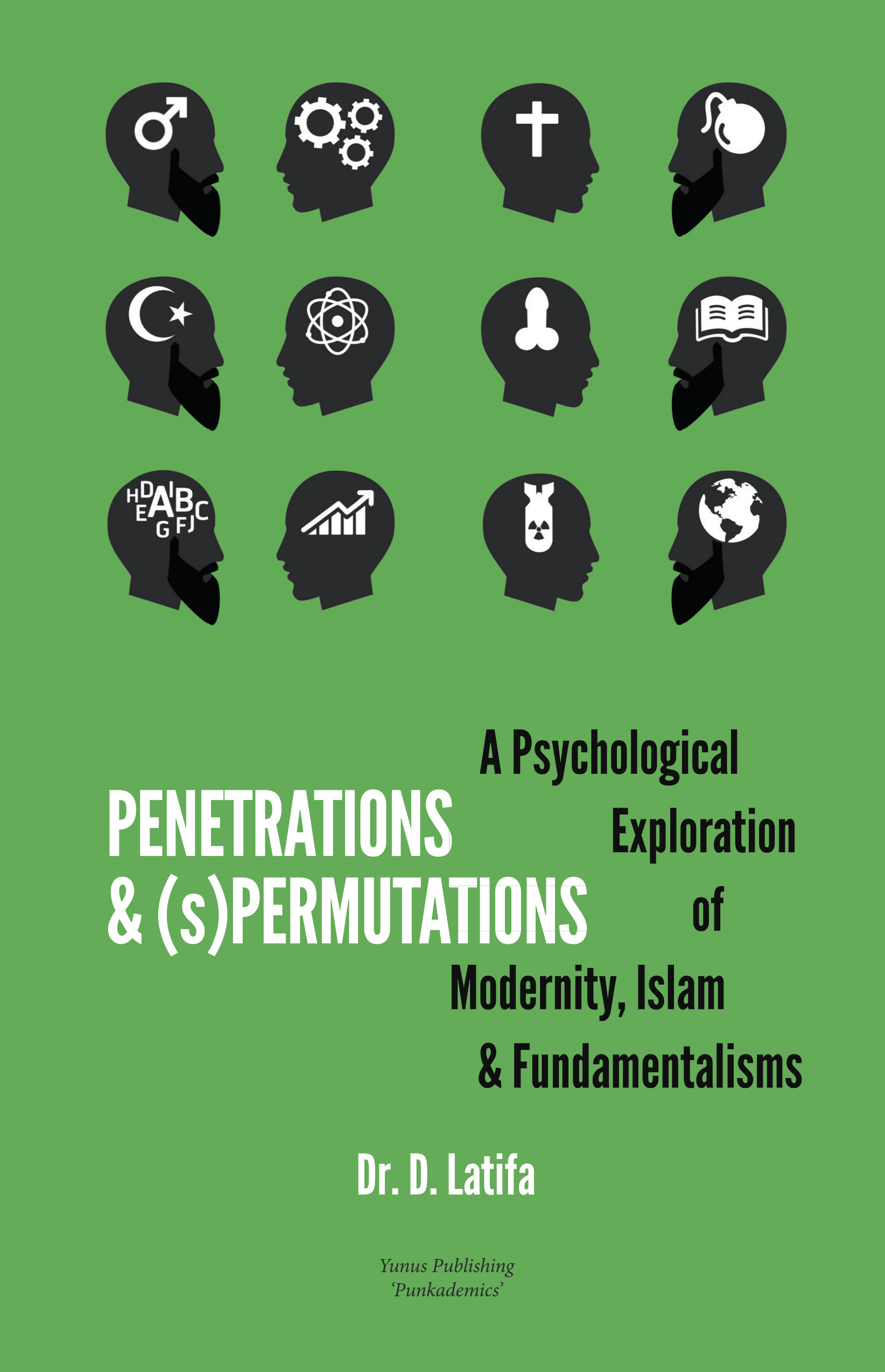 Academic, theological and cultural discussions on fundamentalism are overwhelmingly dominated by a discourse on the need for ‘modernization and development’ in the Muslim world. Yet, the crude distinction between East and West, religious and non-religious, Muslim and modern frequently fails to understand the under currents of psychological thought patterns in modern forms of fundamentalism. If we genuinely want to have a deeper understanding of contemporary tensions, Muslims as well as non-Muslims need to look beyond geo-politcal explanations and recognize how key dimensions of Islamism are deeply linked to the modern, masculine ‘mind’.

This psychological and feminist exploration identifies some of the intricate links between modernity, Islam, gender, sexuality, violence and fundamentalisms. Mediated by certain psycho-theological ‘penetrations and (s)permutations’, they form the psychology of a growing global paranoia about ‘the other’, East and West.

The conventional secular critiques of contemporary religious fundamentalisms - whether in terms of liberal modernity or in terms of false consciousness - have shied away both from a psychoanalytic and a feminist diagnosis of its sources and its effects. Even when they speak on behalf of women who are routinely targeted by religious fundamentalism, the analysis of the fundamentalist psyche is not a feminist analysis.  This  book focuses on the case of Islamic fundamentalism and corrects this absence with great originality, genuine intellectual acuteness, and a lively sense of fun. (Akeel Bilgrami - Johnsonian Professor of Philosophy, Department of Philosophy, Columbia University.)

One can read this book in two ways -- as a serious attempt to supply a systematic, dissenting vision of Islam or, alternatively, as a marvelous effort to extricate Islam from allegedly strictly literal but in reality narrow, misleading reading of its texts and, then, infusing it with not merely philosophical sensitivities implicit in many versions of lived Islam but also with constructions of self teased out Islamic traditions in dialogue with diverse cultures, schools of psychology and traditions of healing the world over.

I opt for the second reading and welcome this book as a fascinating, unconventional and, in many ways, striking intervention in the suddenly fashionable field of Islamic studies. The author brings into play  her experience as a teacher of psychology and long tenure as a psychotherapist who combines in her work elements of Jungian psychology with psychological insights from Islamic mysticism and folk practices in her part of the world.

What I like about the book  is that it has limited concern with formal academic expectations and conventions and that freedom shows. It also gives the book a touch of unpredictability and freshness.  Nor does it detract from the intellectual challenge that it poses to  those with fixed ideas about their responsibility to Islamic scholarship and to those who believe that the last word has been said on Islamic knowledge systems. Readers will love it. (Ashis Nandy - Political Psychologist, winner of the Fukuoka Asian Culture Prize, author of 'The Intimate Enemy'.)

The author brings to bear  meticulous scholarship and deep insights to offer new perspectives in an area that is still generally discussed in terms of a conflict between secularism and religion. She shows that this is an incomplete, and in critical respects, erroneous analysis. She takes us below the surface to examine the interaction between modernity and religion (both Muslim and Christian), and places them in their larger historical and social context.

Drawing from post-modern, post-Jungian, and feminist writings, she makes a distinction between 'low' and 'high' Islamists, showing how the 'high' (educated) Islamist has also internalized the Western scientific-religious ethos of modernity - what she calls Cartesian-Christianism. She proposes that the Cartesian split of mind and body is characteristic of militant and violent strains of Islamism, and that at its core is the denigration of women.

Brilliantly weaving together the threads of her argument, the author always brings us back to hypermasculine/dominator undercurrents in both religious fundamentalism and secular modernity. While much of the book critiques Western modernity, she  is not afraid to also shine her critical light on Islamic fundamentalism. She shows how in Pakistan mysticism has been made a heresy despite the heritage of Sufi philosophy and poetry in Islam; decries what she calls Money-theism and the Wahhabi religious dogmas exported by the Saudis; and exposes the rise of the Islamic state as a hypermacho concept, with devastating effects on women and society at large.

This is not only an important book: it is a fascinating and courageous book that shines new light on how we can transcend present thinking and move forward at this increasingly dangerous time in history. (Riane Eisler - president of the Center for Partnership Studies, author of 'The Chalice and the Blade' and 'The Real Wealth of Nations'.)

What can we expect of Dr. Latifa's promise to give us a critique of "Cartesian Christianism" as the mindset underlying modernity? We can look forward to a first-rate dragon slaying. She identifies the fire-breathing beast as "hyper-masculine, hegemonic , and violent," living within all industrialized and industrializing countries. She will thrust at Islamisms high and low. She will deride Saudi "money-theism." She will castigate Mohammad Atta and Richard Cheney equally as ruthless murderers, obsessed with extinction of their chosen targets, and indifferent to collateral damage, the deaths of the innocent and uninvolved.

As psychoanalyst, she understands how men and women require constant reconciliation. As trans-religious thinker she knows that Islam and Christianity need recognitions and attunements to each other, which allow essential definitions to continue and sacred traditions to inspire. In the very act of grander and more hospitable conceiving of things, oppositions are minimized, transitions eased, transmutations enabled. If this is not a work of peace, what is? Peacemaking can be trenchant, even mordant in its tone, because transparent honesty is its precondition. Its enemies are obscure benignity and vengeful malevolence, alike.

If paranoia, as she says, has become a "global condition," there clearly exists a need to manage it into metanoia: transformative change of heart. This book allows and enables such change. (Theodore Friend - member of the Council on Foreign Relations (New York), Former President of Swarthmore College and the author of  'Woman, Man, and God in Modern Islam: Dialogues in Five Muslim Cultures'.)

Whenever I follow current debates on fundamentalism, violence, masculinity, sexuality and the perceived threat of Islam, I feel that the arguments suggested by Western 'experts' and intellectuals fall short and do not dig deep enough to come up with convincing explanations on modernity. These voices seem to remain imprisoned in their Western cultural orbit unable to look beyond. On the contrary, the author of this insightful work, an eminent psychologist, cultural theoretician and accomplished writer, offers a unique and original analytical perspective and magnificently shows how key dimensions of Islamism are essentially linked to the modern masculine 'mind', what she rightfully calls the 'myth of the hero' . Moreover, she discusses the loss of the mythos and the Divine Feminine and how this related to the overall Cartesian-Christianist thinking which permeates the West as well as the East. (Prof. Dr. Jürgen Wasim Frembgen, Anthropologist, Islamologist & Writer.)